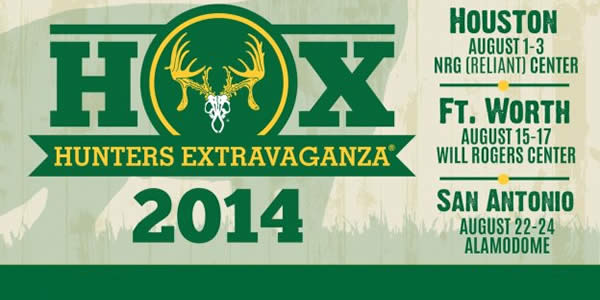 Don’t miss out on the Texas Hunter Extravaganza 2014

Nothing could get the better of you this August! Except perhaps booking a trip to the land of unlimited dove and pigeon shooting: Cordoba, Argentina and its premier hunting grounds at SYC Sporting Adventures.

The Texas Hunter Extravaganza is a month long festival for the hunters. Spread over three major cities, 3 days at a time, it has become the place where hunters from across Texas and beyond gather each year to get ready for hunting season.

Where to Find Us?

The Houston show will last from August 1-3, 2014 at the NRG (Reliant) Center, that’s Friday, Saturday, and Sunday — the good old days for a family hunting outing!

For further information on location visit the official webpage for Houston

The Ft. Worth show will be held between August 15-17, 2014 at the Will Rogers Center. That’s the good old Friday to Sunday roulette for you again.

For further information on location visit the official webpage for Ft. Worth

Here’s a snapshot – so take a quick picture on your cell phone!

Just keep the following dates and booths in mind when you head for the Extravaganza!

The Texas Trophy Hunters Association has been valiantly promoting the sport, science, and heritage of hunting for over 35 sound years. As per its well practiced mission statement:

Our outstanding hunting advisors, Dennis Browning and José Cabrera will be waiting for you at the Texas Hunter Extravaganza show to assist you and explain all the benefits of dove hunting in Argentina.

Hoping to see you at the Extravaganza,
SYC Sporting Adventures